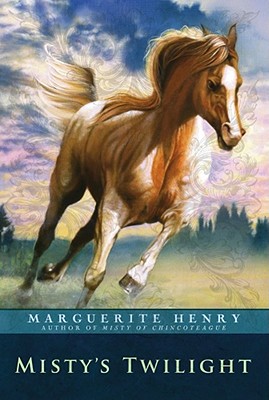 
Usually Ships in 1-5 Days
Misty's Twilight is part thouroughbred, part Chinoteague pony, and one hundred percent fire and talent. A direct descendant of the most famous pony ever, Misty of Chinoteague, Twilight has greatness in her blood. Now it's her turn to shine, perhaps as a cutting horse, a jumper, or in the graceful art of dressage.

Can Twilight, whose ancestors were wild ponies living on an untamed island, do it? Can she compute against the best horses in the world...and win?
Marguerite Henry was the beloved author of such classic horse stories as King of the Wind; Misty of Chincoteague; and Stormy, Misty’s Foal, all of which are available in Aladdin paperback editions.